The Best Foods to Build Muscle

by David Walker on 21st October 2021 in Boxing Training

So, you want to know the best foods to build muscle.

And it’s not just a want – it’s a need. A personal goal. You’ve tried everything. Going to the gym two hours earlier than normal. Take vitamins and minerals with every meal.

But more gym time is simply making you excessively tired. Taking vitamins and minerals obsessively is getting annoying. Is there nothing you can change to help you?

Yes, I say to you, yes there is a change to make. Change your diet.

As useful as those extra gym hours may seem, they’re going to have minimal influence if you don’t increase the amount of protein and energy in your diet. No matter how much you want to increase your muscles, simply add in some of the foods below to your meal habits, and, combined with extra training, your muscles will be growing in no time. And don’t worry – this list includes vegan options as well. Contrary to what you may have heard, you can build up those muscles with a 100% vegan diet. 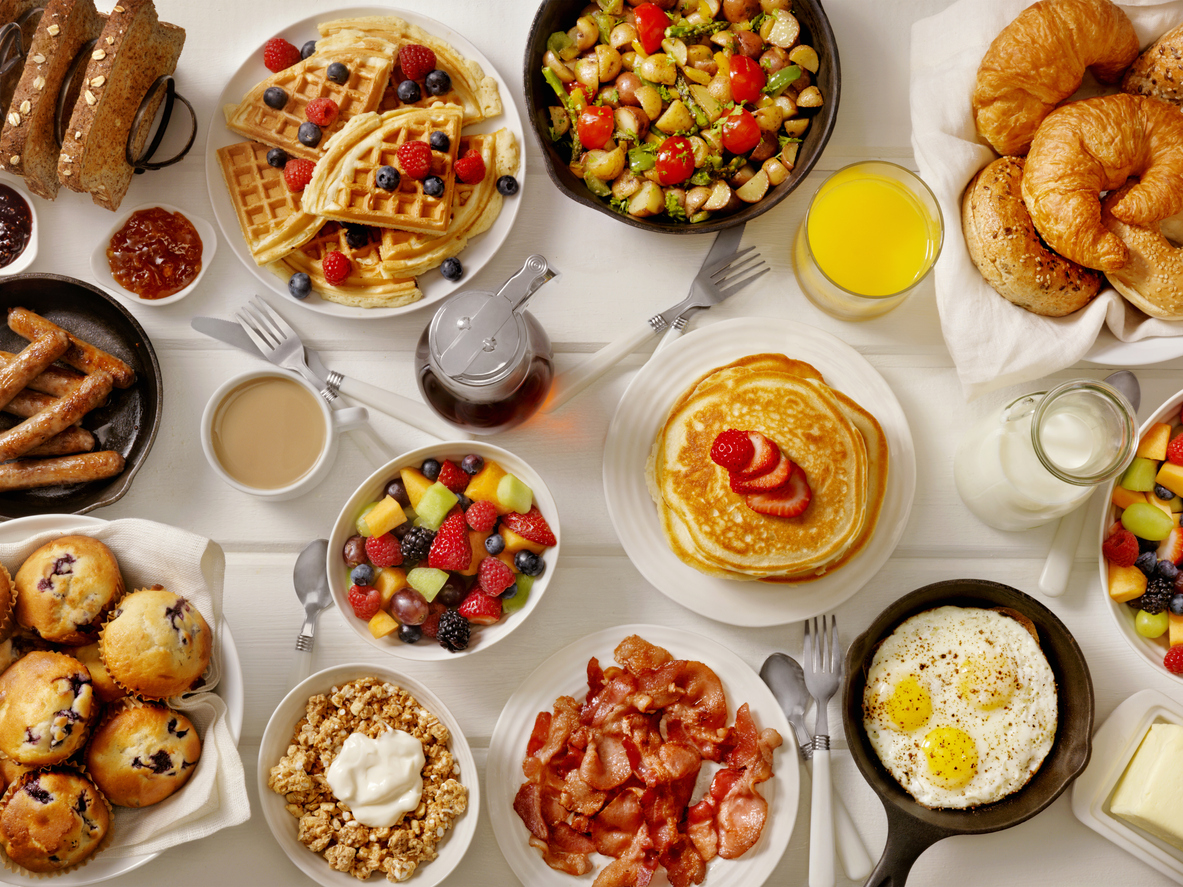 We’ve all heard the saying “breakfast is the most important meal of the day” and it definitely is. Breakfast should provide you with the energy and nutrients to keep you going until at least lunchtime, and when you’re trying to build muscle, it should contain enough energy to keep you going past your next meal.

Milk and yoghurt in particular are high in protein. They’re both easy to work into breakfast, whether it be in a drink or as a meal. Check the percentage of fat before you buy it, though. Dairy can often contain large amounts of fat, which replaces the nutrients you’re getting. Try to avoid “corner yoghurts” as well. As healthy as these can look, they often contain large amounts of sugar. If you want to try a specific type of yoghurt, go for Greek yoghurt.

Pulses in general are an excellent source of protein and energy. Beans with toast or bread is a good way to kickstart your day, as it provides you with a large amount of fibre. Having brown bread will increase your fibre intake even more; white bread often has increased sugar content instead.

If you’re someone who likes a hot meal for breakfast but isn’t a fan of beans, go for eggs. Eggs – especially the white – are high in protein, and boiled eggs are an easy meal, as they don’t need a watchful eye. Brown eggs are also better for you, with a higher protein content than white eggs.

You may think this should come under “Dairy”, but cottage cheese, in particular, is an excellent food to add to your breakfast. It is high in protein and low in sugar and fat so if you want a tasty and healthy meal to start the day, cottage cheese is the thing to go for.

Oat porridge, more commonly referred to as oatmeal, is a meal that has been eaten by humans for over 5000 years. A variety of oat types are used to make porridge, with most of them being grown worldwide. They can be formed into oatmeal in several ways, each creating subtly different ways to make oat porridge. It is best to compare types and brands of porridge oats before buying them; their production methods will affect their protein levels. 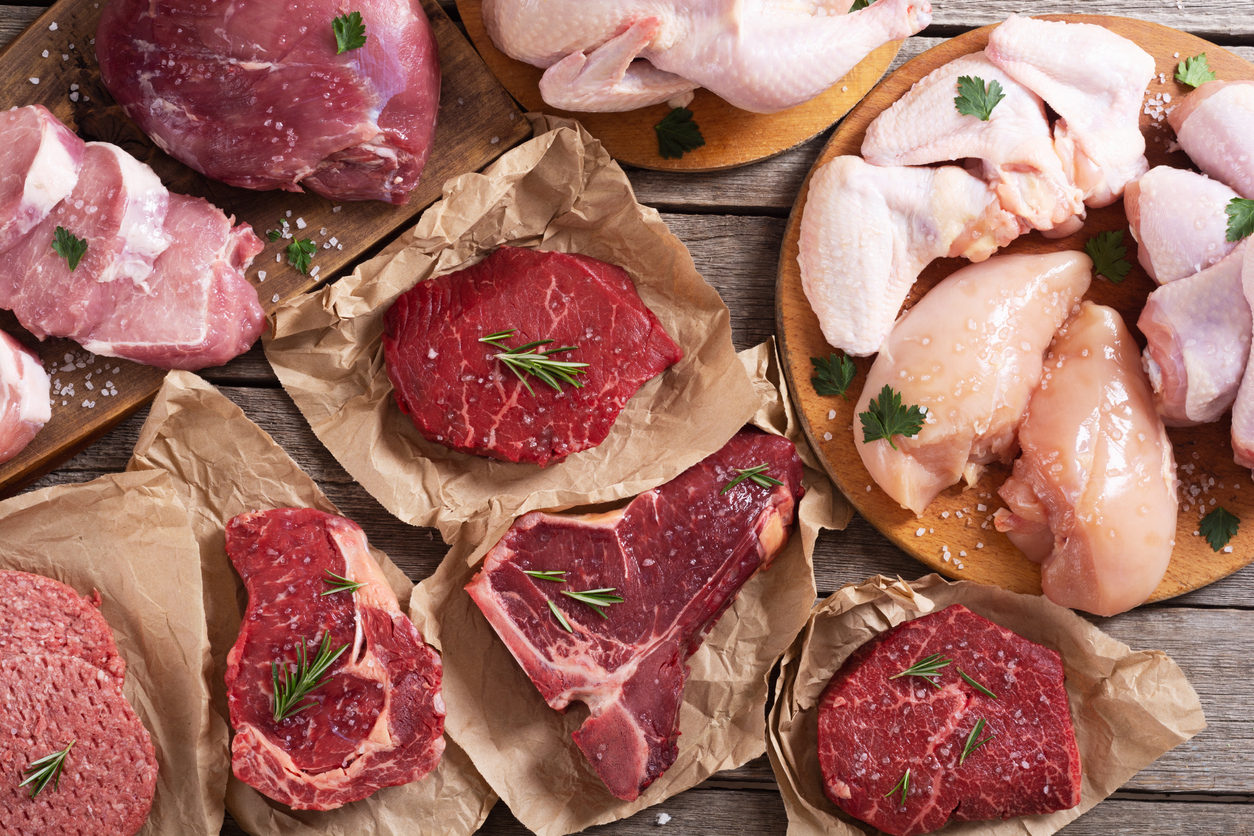 Lean meat is the best type to eat when trying to gain muscle as it lacks significant amounts of fat. All the meats below are suggested to be served lean.

Both chicken and turkey breast contain large amounts of protein.The best way to eat these portions is roasted, as this ensures there is less oil used and a lower risk of external meat being burnt off.

Like most meats, pork chops contain a large amount of pure protein. When dried, lean pork chop can be around 89% protein. Pork chops have a minimum amount of fat, and contain all of the required nutrients needed for your daily intake.

If you want to choose the meat to eat when increasing muscle, go for pork.

The best type of steak in terms of protein levels is beef sirloin tip side. It doesn’t contain any bone and is fairly cheap. Sirloin tip side steak can be cooked in many ways meaning you can fit in other protein-rich food easily. 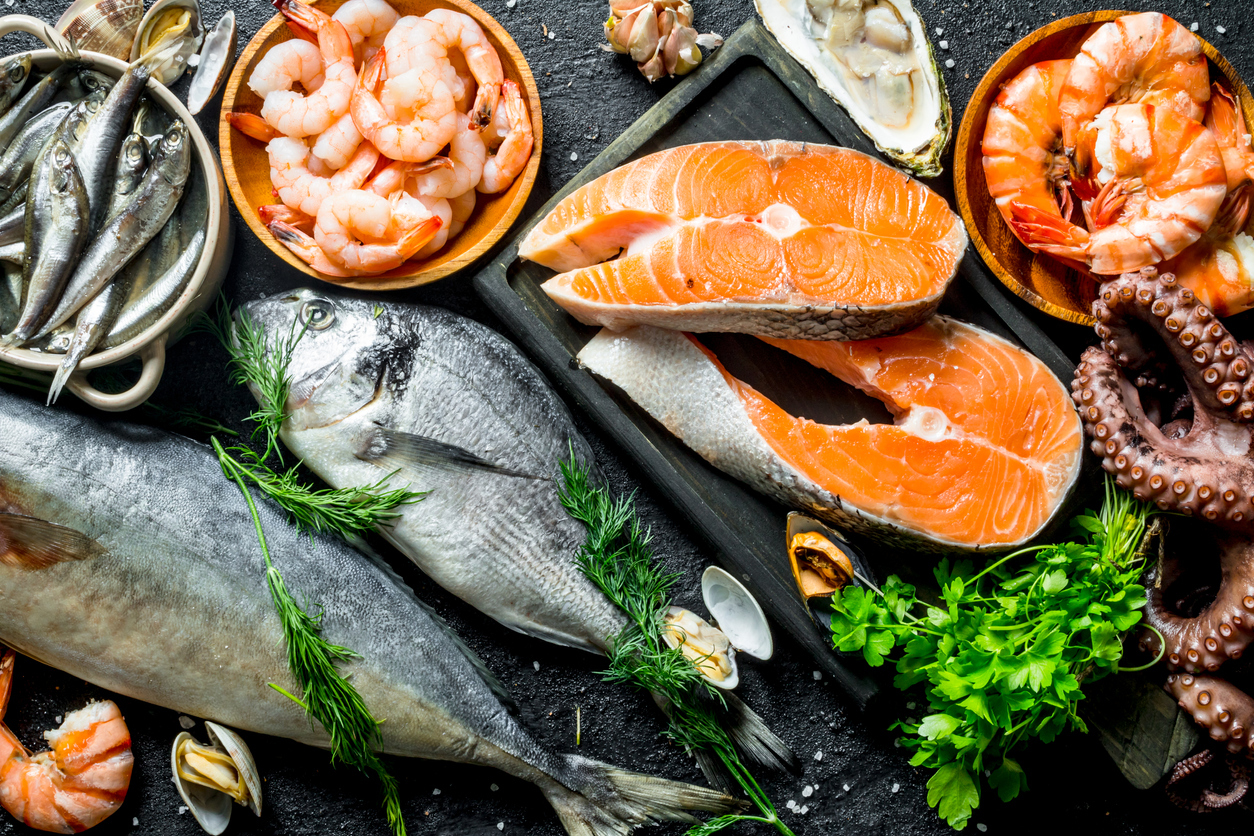 Wild salmon is the best fish to eat when trying to increase your protein intake. In the wild, fish aim for food that will give them large amounts of protein and energy to keep themselves alive. This diet is mostly fresh fish and shrimp (which is what gives salmon its recognisable pink colour!).

Farmed salmon are fine for you to eat and will definitely help in your aim to grow more muscle. However, their diet is controlled to help them taste better. It also isn’t fresh like that of wild salmon, and they’re given things like growth hormones and other chemicals which aren’t great for humans or the environment.

Tinned tuna is approximately 28% protein, making it an excellent choice to increase your protein levels. It also has no carbohydrates and a minimal amount of fat (roughly 7%). Like salmon, it can be eaten in a variety of meals, but a lot of these meal choices include fatty foods or have low nutritional value.

Pumpkin seeds are a small seed that contains up to 40% protein. They are best eaten as a snack, or with a salad. They do not have to be cooked before being consumed.

Just a brief FYI – soybeans and soya beans are the same thing.

Like pumpkin seeds, soybeans are best eaten as a snack or as an addition to a salad. They are difficult to cook as they have to be soaked in water overnight then simmered in a pan.

Despite this difficulty, they are incredibly high in protein and one of the most advisable things to eat if you want to change your diet to increase your muscle mass.

Beetroot contains a variety of nutrients and minerals that are good for the body, including the protein needed to help increase muscle. They’re available all year round, although more accessible during summer and early autumn.

Every part of the beetroot can be eaten, and it can be cooked and eaten in almost every way possible. The easiest way to include beetroot into your diet when training is in a protein shake or smoothie; beetroot is easily blended. If you want to establish it into a “proper” meal, roasting it is the best way.

Pulses are an easy and varied foodstuff to work into your diet. From baked beans to lentils, the majority of pulses are high in protein and other nutrients and low in fat. They easily contribute towards the recommended “five a day”. 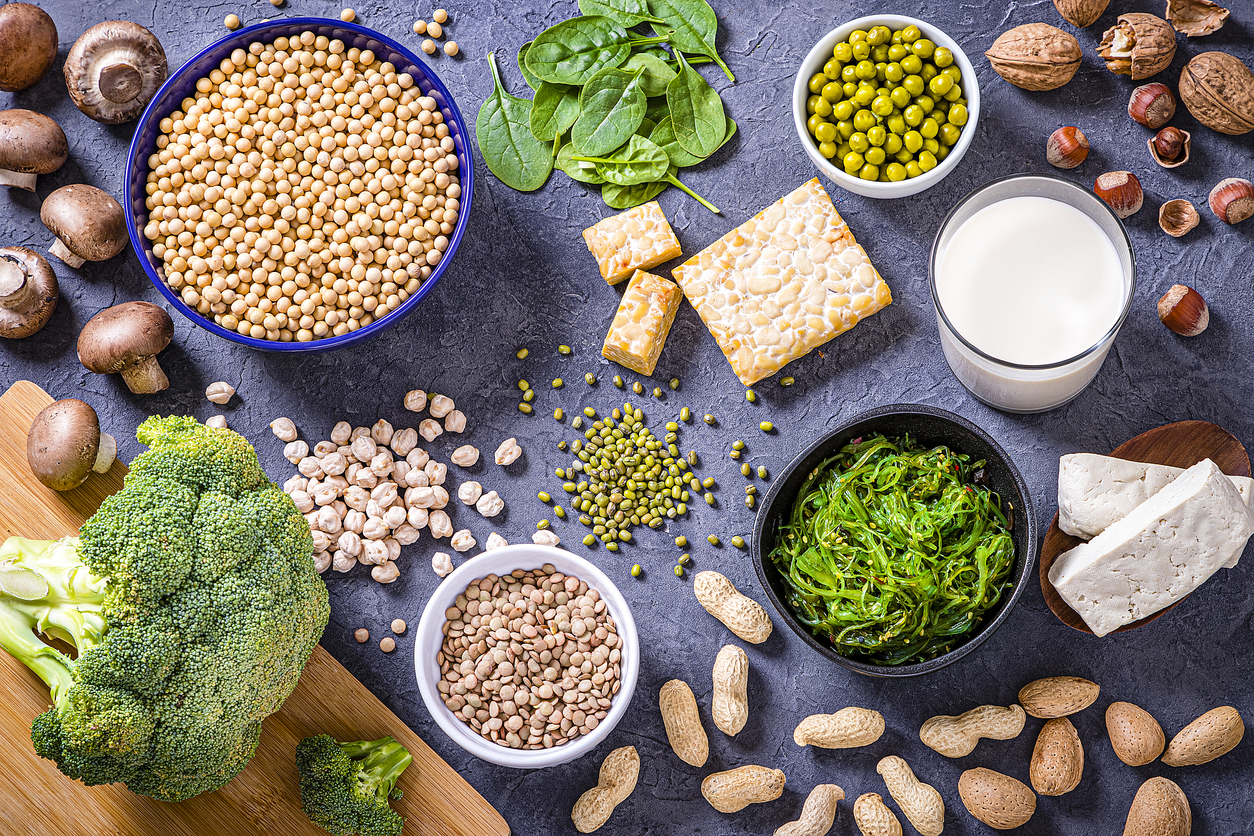 Vegan meals, as a general rule, always contain a large amount of protein as vegans don’t eat meat or dairy products, two of the most protein-rich foods. So, whether you’re a vegan normally, or you just don’t like the idea of eating large amounts of meat every day, here’s some food that contains high levels of protein and is suitable for a vegan diet.

Pronounced “Keen-wah”, quinoa has been farmed in the Andes Mountains, South America, for centuries. Its seeds are high in protein and it can be used as substitutes for rice, pasta, and even oatmeal.

Quinoa is easy to cook – you just put it in a pan of boiling water and leave it to simmer until all the water is absorbed. You need to stir it every few minutes to make sure it isn’t sticking to the side of the pan, but apart from that, it takes care of itself.

Seitan (pronounced “Say-tan”) is made from pure gluten. It is low in carbs and fat due to the wheat gluten being rinsed before being sold. Its protein levels are not exceptionally high, but they are high enough that they will have a significant influence on your aim to increase your muscle mass.

Soy milk is a traditional Chinese drink that has become popular in the Western world due to its nutrient contents. Without additives, it contains a large amount of protein for its size, but very little fat or carbohydrates meaning it also has low sugar content.

When buying soy milk with the aim of increasing your protein intake, it is important to check the nutrients on the label. A lot of soy milk will have added sugars to improve the taste or make it taste more like cows’ milk.

Soy milk can also come combined with flavourings such as chocolate or strawberry, or substances that will turn it into a milkshake-like drink. Once again, it’s important to check the label, as these may increase the fat, carbohydrate, and sugar content.

Tofu is a traditional Asian foodstuff, made from the curds of soy milk. Whilst it has only been a reported food in the Western world since the mid-1700s, it has been eaten in some Asian countries for approximately 2000 years.

Tofu is high in protein and iron, and low in calories, making it an excellent food for those trying to gain muscle whilst staying within a vegan diet. It can come in flavour variations depending on which country’s recipe the maker is following.

When deciding the Best Foods to Build Muscle

Be careful how you work these foods into your meals. Simply adding large amounts of protein-rich foodstuffs into your diet will have a negative effect on your digestion and general health.

Remember, eating protein-rich food is not the only thing you need to do to increase muscle mass. Training more is necessary for you to see a significant improvement. You shouldn’t focus simply on the areas you want to improve, either. General bodybuilding is something you should also put into practice to help increase muscle mass.

Also, remember you need to keep this going. Stop eating protein-rich food after eight weeks and you’ll destroy all your good work. This is something you have to timetable into your diet.

Whatever your dietary choices, though, work extra protein into your meals, and you’re sure to see a definite increase in your muscle.

Find all the training and protective gear you need for an amazing boxing workout in our Cleto Reyes training equipment range.