by Jamie Parry on 15th September 2020 in Boxing Training, News

Sometimes, when watching a fighter, they can look in control of a fight without seemingly doing anything even when losing rounds. I had this thought last night when watching the relaxed boxing style of Anthony Yarde stop a very on-game Dec Spelman on BT Sports.

Throughout the fight, Spelman came forward throwing shots and looked to make a fight of it. Yarde, who had been out since February, was labelled ‘a bit rusty’ by the commentators, however, I saw something a little different.

Despite a lower punch output, Yarde dictated the pace and flow of each round. Tucked nicely into a ‘Philly Shell’ defence, he was able to keep Spelman exactly where he wanted. When it was time to close the show he unloaded hurtful punches at will, forcing a slightly premature stoppage, although few would disagree that the writing was on the wall. 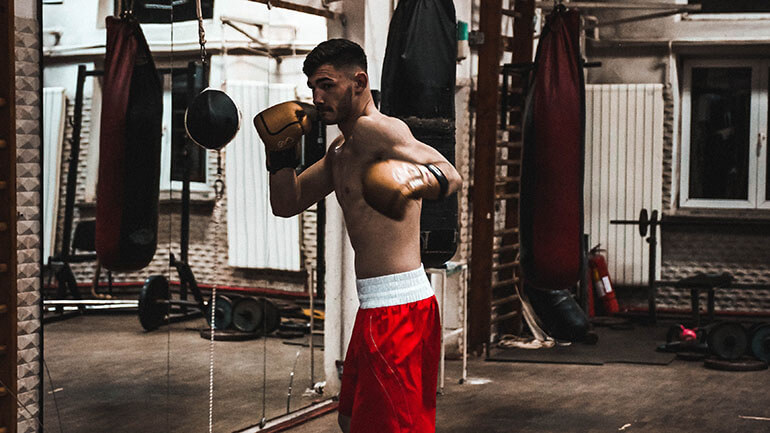 Is relaxed boxing an underrated trait?

Relaxation is a rarely talked about facet of boxing, but one which all elite-level fighters display. There are also examples at the other end of the spectrum where a boxer like Chris Eubank Jnr. is so relaxed that he actually doesn’t do enough to win!

It is a fine line to tread but it’s an aspect that’s certainly worth instilling in beginners, a focussed relaxation will give much more fluidity to both defensive and offensive moves.

The two most obvious examples of the last few years have to be Tyson Fury and Floyd Mayweather. In the opening rounds, they may appear slightly jittery but as the fight wears on they give the impression that the ring is a comfortable place for them.

Not only does this allow them to throw punches more instinctively, but the clarity also lets them react to their opponent’s punches. Elite-level relaxed fighters don’t just rely on a reflexive approach though.

As we know, anyone can be caught, even Floyd Mayweather. Cleverly, these relaxed fighters will build in a stance that offers protection even when their hands are held low.

Observers will note that, despite a low leading hand, Mayweather’s chin was exclusively tucked nicely into his front shoulder, shielding from any clean offensive shots. A long pawing jab is also employed to judge the distance and distract the usually frustrated opponent.

Yarde used this to great effect last night against Spelman. Regardless of what damage the jab is doing, its main job, in this case, is to control the opponent’s distance and work rate.

A good friend and great fighter Dean Francis used the moniker S.T.A.R which stood for Speed Timing Accuracy Relaxation. He used to say, “without the R there is no STAR”, I often teach this to young boxers starting out on their journey.

Relaxation used in the right way is a game-changer!