Brush up on your boxing footwork for beginners

by David Walker on 27th August 2020 in Boxing Training, News

Home > News > Brush up on your boxing footwork for beginners

When you start out boxing you might think it’s all about the upper body, but boxing footwork for beginners can be one of the most important things to master.

Boxing, at its heart, is a process of hitting and not being hit. So, you would naturally assume that fast hands, head movement and lateral movement play the biggest role in overcoming an opponent. But, strong footwork can be the difference between making a novice fighter good and a good fighter great. Boxing footwork for beginners is an essential part of training and developing as a boxer.

Every elite fighter in history has possessed magic in their boots. For beginners boxing footwork inspiration, we can look at the fleet feet of Muhammad Ali, which allowed him to glide around the ring against Sonny Liston. Or the spring-loaded attack of Manny Pacquiao that allow him to close distance so effectively.

There are many subtle nuances to footwork which, as in the examples above, can be used to great effect in either attack or defence. Below we’re going to break down some basic boxing footwork for beginners that will help improve a novice boxer and perhaps remind those with more experience why footwork should not be neglected. 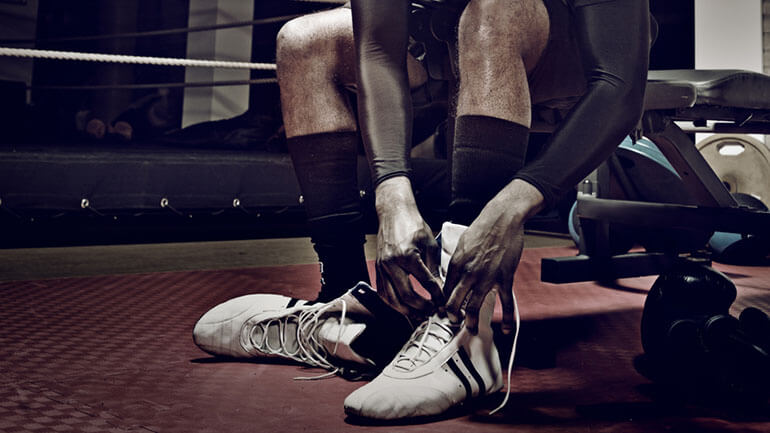 The basics of boxing footwork for beginners

Luckily for novices, the basics of boxing footwork are quite simple; you need a solid stance that maintains your balance and forms a good starting point to launch off from.

In a classic boxing stance, the fighter stands as if paused in a walking position; with the strongest foot to the rear and weakest foot in front. Your knees should be slightly bent to allow movement, provide balance and absorb punches.

Good boxers will keep their weight centrally and on the balls of their feet, this makes moving quickly much easier. From this position, you should be able to bob and weave your upper body around a punch without losing your balance.

Keep up the motion

Once the basic stance is set, then movement is the natural progression. If you stay firmly planted in one spot for the entire fight then you’re going to catch a fair few punches.

Again, you need to be up on the balls of your feet, this gives you the power you need to quickly spring forwards, backwards or to one side as needed.

Pushing down through the rear foot, that’s positioned slightly behind your body will push you forwards. While pushing weight through the front foot, which is slightly closer to your opponent, will allow movement backwards.

The same rhetoric can be applied to side to side movement, pushing weight through one foot to create movement in the opposite direction; pushing right moves you left and pushing left moves you right.

It is important to note that these movements should be more of a ‘push and step’ rather than a ‘step and drag’. You don’t want to be sluggishly sliding your feet across the floor, everything should be quick, sharp and unpredictable for your opponent. Remember, lazy feet will only get a boxer in trouble, taking more shots than they need to. 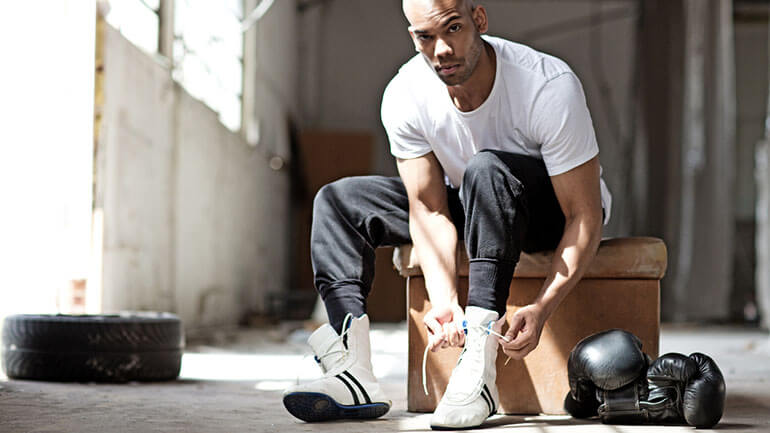 Moving off the centre line

The best analogy we’ve come across for defence in boxing was this; imagine you are on a train track and a train is coming towards you, moving forwards or backwards will only get you hit, the only directions to avoid trouble are to move off the line to either side.

When we attack in boxing it is very easy to move towards our opponent and then either wait for them to return fire or step backwards to avoid their reach. The problem with this is that it makes things very easy for your opponent. In theory, even on autopilot all they would need to do is move forward in a straight line and swing a fist out at you.

Our feet provide a neat little method to get out of this in the form of a pivot.

So, say you have moved forwards in your stance, thrown a one-two combination and now you need to move out of the way.

The front foot pivot lets us do this, pinning the ball of the front foot to the floor and drawing an arch around with the rear foot, meaning we are now facing them from a different angle. The benefit of this is that we are now one step ahead and in order to attack us, our opponent must turn to face in our direction, where we can greet them with a sharp backhand!

Pivoting in this way, twisting your body a quarter, half or three quarters turn around your planted forward foot can help you to spin out of the way of your opponent. And this means they have to move to correct their position to face you again, disorienting them and putting you at an advantage. 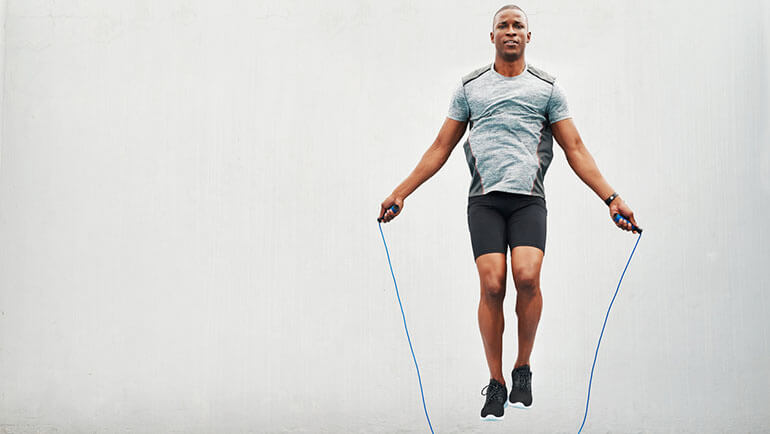 Drills for boxing footwork for beginners

Whether you are destined to become a devasting puncher or a technical genius, it’s essential that footwork and movement drills are a core part of your training. According to Sparring Partners, former heavyweight world champion Wladimir Klitschko spends at least 45 minutes at the beginning of every training session working solely on his movement in the ring before he even throws a punch!

Vasyl Lomachenko, who is known for his Matrix-style movements in the ring, spent years as a child learning how to dance which explains his seamless style of being able to manoeuvre and outmanoeuvre his opponents whenever he wants. Whilst we can’t give any tips on doing the cha cha cha, below are three top tips to keep you on your toes.

Pick up a skipping rope

Jumping rope is an age-old training method for boxers and not only helps with building good stamina but also keeps fighters light on their feet. When jumping rope, it’s good to vary the style of skips you do to get the most from the exercise.

Moving from one foot to the other is important as it replicates the transfer of weight between legs that happens in the ring. While double under skips build power in the calves, which is a must when learning to move quickly and generate awesome punch power.

The pace and positioning when skipping are also important, every training exercise, where possible, should echo movements in a fight. Therefore, it’s recommended to skip in rounds, having three minutes of work followed by one-minute rest.

During those rounds it is important to have bursts of intensity followed by a more consistent pace, moving forwards, backwards and side to side ensuring that you aren’t stuck in one spot. 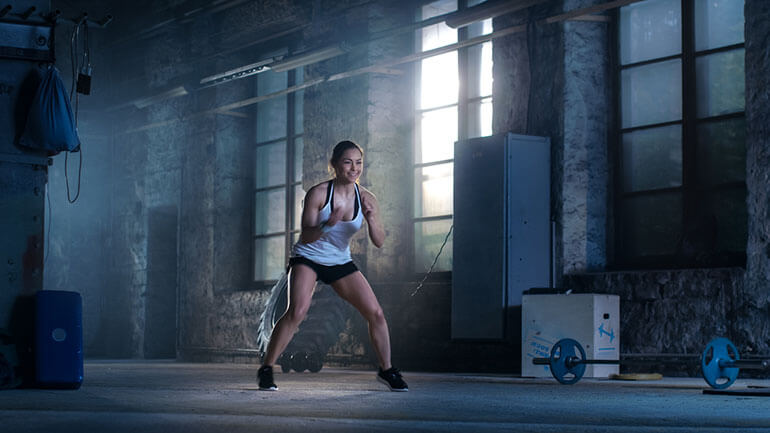 This one can be a lot of fun and seriously give you an edge when it comes to judging distance, reflexes and improving ring IQ.

In shoulder tag, two training partners face one another in the ring or in a spacious gym area, both in the boxing stance which we explained above. The idea is that each boxer has to tag the other on their shoulder three times, using an open hand without gloves. Combatants must only throw straight punches and aren’t allowed to throw combinations. Once one person has scored three times then the other must do a forfeit of 5 press-ups before restarting the game.

Working on a rounds basis again encourages both boxers to concentrate equally on attack and defence. The game helps boxers to work on strategies and implement them in a competitive training environment.

Those that improve their footwork, quickly become able to dominate. Tweaks can be made to the game in order to develop different parts of a boxers’ style. For example, one boxer could be told to only defend and not attack for one round, while the other is told the opposite. In the next round, the pair can reverse the strategy. The beauty of shoulder tag is that it replicates sparring without the wear and tear on the body.

Another old favourite, shadow boxing can be used to great effect as a warm-up or cool-down activity. It is essential to utilise the whole space when shadow boxing, novice boxers often make the mistake of staying in the same spot which sort of misses the point of the drill.

The idea behind shadow boxing is to visualise an opponent in front of you and practice throwing shots and moving out of range and off the line before they throw a punch back. This can be quite daunting for a beginner so the best place to start is probably in front of a mirror where it is easy to see which shots are being thrown and then for the boxer to practice evading their reflection.

When doing footwork exercises it is always good to have music to work to. Boxing is rhythm and a beat really helps.

The final word on boxing footwork for beginners

Boxing is a whole-body workout and if you neglect one area you’re going to be unbalanced and underperform. So, while physically it’s a boxer’s arm muscles that might get all the attention, you can’t forget to build up your legs as well.

Whether you’re fighting for fitness or want to break into the big time, to really get the benefits of boxing, you need to work on your lower body strength. Staying up on the balls of your feet, like you need to do in all of the above stances, requires loads of strength in your calves.

So, next time you hit the gym or work out at home, pay attention to your legs and work some drills into your routine that will build up your boxing footwork.

And, when you’re ready to hit the ring with your newfound boxing footwork skills, make sure you do it in style with a pair of Cleto Reyes boxing gloves.