by David Walker on 8th August 2018 in Boxing News

Cleto Reyes remains one of the main pro fight gloves of choice.

For a family-run business based out of Mexico, you might say that they’ve had to punch above their weight to become such a successful brand. Now one of the most trusted and sought after boxing brands, it’s difficult to imagine that it all started with a boy experimenting on a sewing machine.

Cleto Reyes may be one of the most well-known brands in the fight game, but unlike other boxing glove brands, they have resisted the low cost manufacturing lure of the far east. Instead, the company insist on the traditional method of making their products from a small workshop on the outskirts of Mexico City.

They are still a family business with strong roots to their humble beginnings, enabling them to be an authentic and trusted brand within the boxing world. The Cleto Reyes brand was originally created by Cleto Reyes Castro. Born in 1920 in Mexico City, Cleto didn’t have the easiest start in life. He had to start earning an income when he was just 12 years of age.

He left school to work in a workshop sewing baseball gloves. Due to family issues, Cleto was homeless, so he slept at the leather workshop where he worked. It was in this very workshop, the place he also called home, that he would begin developing his creative talent. When the workshop closed for the day, Cleto would develop his skills on the sewing machines, learning, testing and experimenting with sewing leather.

Cleto’s love affair with boxing began when he was 16. He was drawn to a nearby arena which featured boxing and followed the rivalry of three top Mexican fighters, Joe Conde, Rodolfo Casanova and Juan Zurita.

In 1938, he responded to an advert in a paper inviting young people to take part in a boxing tournament. It was the first and last time Cleto would enter the ring to fight.

Cleto took a ‘battering’ in the ring, but spectators were so impressed with his performance, they threw coins as a mark of appreciation for his efforts. The Birth of the Cleto Reyes boxing glove

This event marked a significant point in Cleto Reyes’ life and career. He decided not to fight again, despite the encouragement of the crowd. Instead, he began his career with boxing gloves, by using the knowledge he had learned in the leather factory to mend the gloves he had worn during the fight.

Having mended his own gloves, Cleto took another step forward. He decided he wanted to enhance the gloves he had used in his fight to make a new and improved version. He spent several years testing, modifying and perfecting his very own Cleto Reyes boxing gloves.

After gaining approval for his gloves to be used by the local boxing commission, the Cleto Reyes gloves were first used in a world championship fight in 1945. 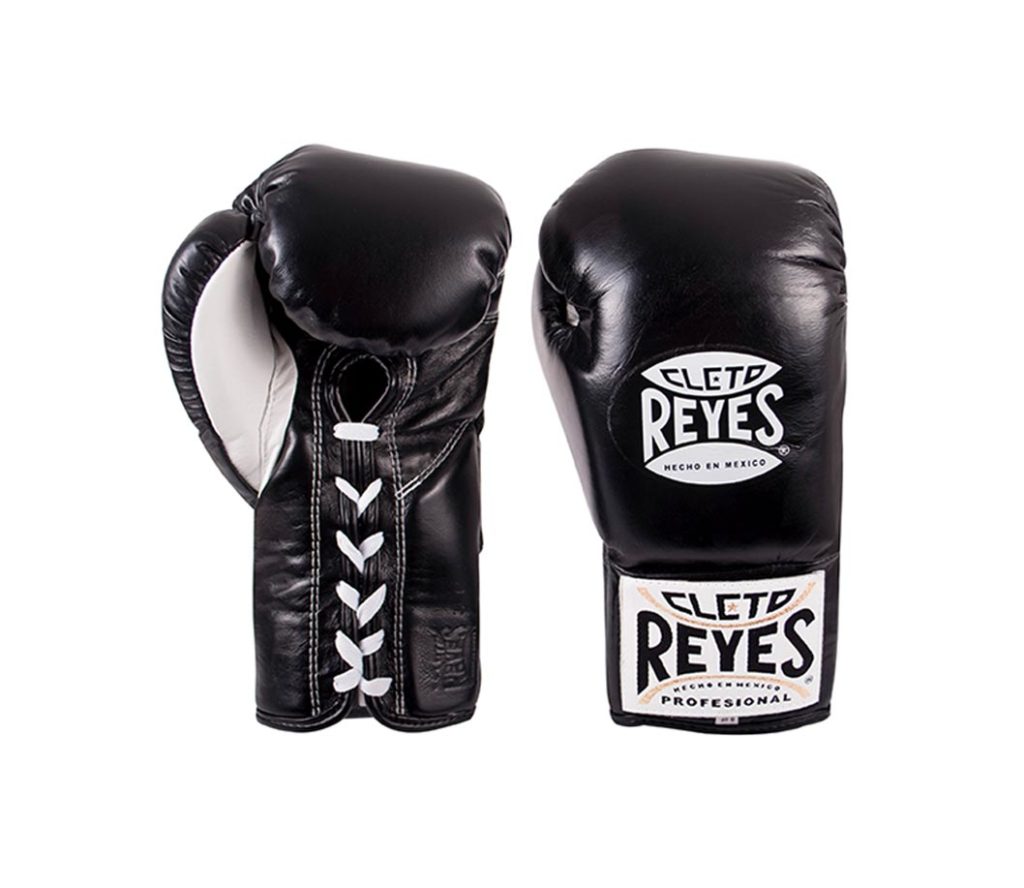 The growth of the Cleto Reyes brand

By the early 1950s Cleto had set up his own workshop and was selling his boxing gloves to Mexican fighters. Their trainers would then help to spread the word about Cleto Reyes boxing gloves by selling pairs of them when they traveled to America for fights.

It wasn’t until 1965 that the brand started being distributed formally throughout the United States, resulting in growth beyond Mexico.

As demand grew for the gloves, Cleto’s son Alberto Reyes joined the business full time. It coincided with a decline in Cleto’s health, but Alberto’s entrepreneurial skill-set was to become a driver for the next generation of the company.

Alberto went about finding new Mexican leather suppliers, introducing improvements to the boxing gloves such as using lighter and more durable leather, whilst standardising the product. He also registered Cleto Reyes as a brand trademark in 1975.

Cleto Reyes sadly died in 1999, but Cleto Reyes boxing gloves are now established within the sport, so his creative passion lives on.

The company, which is still based in Mexico City, have seen their gloves used by some of the greatest boxers of all time, including the likes of Muhammad Ali, Mike Tyson, Sugar Ray Leonard, Manny Pacquiao and Anthony Joshua.

The Cleto Reyes brand now has a range of equipment ranging from headguards to foul protectors and has distribution partners throughout the world. WBC Merchandise Europe are the official European and UK distributor for Cleto Reyes.

They’ve undoubtedly earned their rich history in the boxing world.

The handcrafted gloves, assembled using traditional methods with premium leather and horsehair padding, have drawn the attention of the world’s top fighters for over 50 years.

In the boxing world, the Reyes glove is known as “a puncher’s glove” because it has a lightweight feel, a slimmer profile and, most importantly, an inner layer of horsehair padding that tends to flatten down and harden over the course of a fight.

We compiled a list of some of the greatest boxers of all time who chose Cleto Reyes boxing gloves for their fights.

“The Reyes boxing gloves are what you use if you want to knock people out.”

Muhammad Ali, or Cassius Clay as he was known in his early fights, needs no introduction.

Arguably the greatest boxer of all time, from the ‘Rumble in the Jungle’ to the ‘Thrilla in Manilla’ Ali, is an icon of the sport.

It was in one of his final fights in 1978 that Ali brought Cleto Reyes gloves into the limelight.

Famously, Ali refused to wear the gloves of the sporting brand that sponsored him. He was instructed to tape over the Reyes logo to avoid jeopardising his sponsorship deal.

But, once in the ring, Ali had his trainer rip off the tape revealing the iconic Cleto Reyes logo.

For Muhammad, the only glove worth wearing was Cleto Reyes boxing gloves.

Ali wore Cleto Reyes gloves for his final against Leon Spinks in an attempt to reclaim his heavyweight title.

Filipino professional boxer, Manny Pacquiao, prefers to wear Cleto Reyes gloves in his fights as it is the ‘puncher’s glove’.

His trainer, Freddie Roach says Pacquiao, “doesn’t feel comfortable in anything else”.

Manny’s choice of glove was challenged by Floyd Mayweather in 2015, when Mayweather argued it didn’t satisfy their contract. However, the dispute came to nothing and Pacquiao was able to wear his favoured Cleto Reyes gloves.

This Mexican pro chose Cleto Reyes as his trademark glove and it’s impossible to imagine him fighting in the ring without them.

Marquez’s career in the ring spanned over 20 years and 64 fights. Throughout his lengthy career, his most memorable fights were against Manny Pacquiao.

Marquez and Pacquiao shared the ring four times over the course of eight years. The first fight was a draw, followed by two wins for Pacquiao.

However, in their final faceoff, Marquez triumphed in style. He knocked Pacquiao cleanout in the 6th round, wearing his trusty Cleto Reyes gloves.

When ‘Iron Mike’ became heavyweight champion of the world in 1986, he was the youngest boxer to ever hold the title at just 20 years old.

Tyson’s career was notoriously colourful. He dominated the sport in his early years, but his outrageous and controversial actions, such as biting Evander Holyfield’s ear in the ring, tainted his reputation.

However, one consistent throughout his turbulent career was his commitment to wearing Cleto Reyes boxing gloves.

Lennox Lewis was a three-time world heavyweight champion and lauded as the best of his generation.

In one of the final, and most anticipated, fights of his career, Lennox faced off against Mike Tyson.

Public excitement for the fight was only heightened by the pre-fight press conference, where a brawl erupted between the two boxers.

Lennox Lewis said he had to fight Tyson:

“If I hadn’t, no matter how much I accomplished, no matter how many other fights I won, there would have always been people who said, ‘Yes, Lennox was good but he never could have beaten Tyson’.”

In the ring Lewis defeated Tyson by knockout in the eighth round retaining his unified WBC, IBF and IBO heavyweight title; both fighters wore Cleto Reyes gloves.

A young George Foreman crushed his opponents to become the king of the heavyweight division at the age of 24.

In 1974 Foreman faced-off against Muhammad Ali in arguably the most famous fight of all time; ‘The Rumble in the Jungle’.

23 years later, at the age of 45, Foreman was still fighting strong when the WBC offered Foreman an ‘eliminator fight’ against Shannon Briggs; in which both fighters wore Cleto Reyes boxing gloves.

The prize would be to face heavyweight champion, Lennox Lewis.

The ‘eliminator’ turned out to be a controversial bout. Although Foreman lost by a majority decision, many experts were of the opinion that Foreman had clearly won the bout.

Sugar Ray was involved in many epic fights in the 1980s, including fights against Thomas Hearns, Roberto Durán and Marvin Hagler.

As an amateur, Sugar Ray won Olympic Gold at the 1976 games and went unbeaten as a professional until his first head to head with Roberto Duran in 1980.

During their second face-off, both fighters chose to wear Cleto Reyes boxing gloves.

Evander Holyfield, another famous fan of Cleto Reyes gloves, remains the only boxer to ever obtain the undisputed championship in two weight classes.

The former cruiserweight moved up to the heavyweight division in 1988. As a heavyweight, Holyfield won the world championship a record four times.

In one of the most renowned battles of his career, Holyfield came up against Riddick Bowe in a trilogy of fights in the 1990s.

Bowe came out on top in their first meeting, but Holyfield regained the crown in their second fight. However, in their third and final meeting, Holyfield lost to Bowe; falling victim to a technical knockout.